Almost 40 years after the last ERA was produced comes a Mini wearing the famous three-ring logo. With the MG Metro Turbo engine tucked under its bonnet, it's not simply a special anniversary model, as John Barker discovers

ERA is not the first name that springs to mind when talking hot Minis. Truth to tell, it’s probably the last, as English Racing Automobiles made it’s last car in 1952, seven years before the Mini first squealed onto our roads. By late summer, however, selected Austin Rover showrooms will be displaying the ERA Mini Turbo, a comprehensively reworked Mini with a 96bhp version of the MG Metro Turbo engine tucked under it’s bonnet. 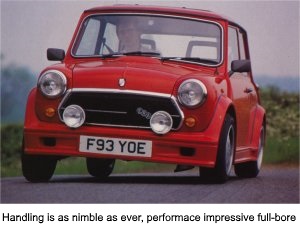 The year of the Mini’s 30th birthday is the perfect time to launch a modified version of Issigonis’s gem, and the familiar ERA three-ring logo is doubtless an evocative badge to adorn it. But the ERA is far more than an anniversary special. The company plans to sell 1000 examples over the next two and a half years at around £12,000 a piece.

If you ask, Dunstable based ERA will tell you that its initials stand for Engineering Research and Application. As befits the company title, the ERA Mini has been conceived and executed with notable professionalism.

The ERA begins life as a part-build Mini City, arriving from Austin Rover as a shell with headlining, glazing, and subframes. Accommodating the turbo of the 1275cc Metro engine requires part of the bulkhead to be cut away while, to aid cooling, holes are let into the rear of the bonnet and covered by a discreet bulge.

Fitting the Mini’s cute lines with a full body kit sounds as promising as covering a thatched cottage with stone cladding, but the result is not unattractive. There’s a hint of ‘funny car’ about the ERA, as if the Mini shell has been grafted onto the chassis of a larger car, but the kit of arch flairs, sill extensions and jutting front bib and rear apron is neatly attached. Deeply offset five spoke alloys sit snugly in the arches and wear tiny but perfectly formed 165/60 HR 13 Goodyear NCT tyres.

It still sounds like a Mini too. Prod the accelerator a few times to prime the carb, turn the key and the familiar asthmatic wheeze of the venerable A-series floats into the cabin. Once underway, its inseparable ally, gear whine, provides the backing. But this tune is a variation of the theme, the longer inlet tract of the turbo softens the induction note.

ERA claims a top speed similar to the Metro Turbo’s 110mph and a sub-9secs 0-60mph sprint (MG Turbo 9.4secs) which seems optimistic. Performance figures are important when persuading customers to part with money that would buy any of the best hot hatches, but, leather trim, body kit and turbo not withstanding, the ERA is still a Mini. The charm factor is irrefutable and, along with rarity value, it is this that will sell the car